Tough year over, tough year ahead for European banks 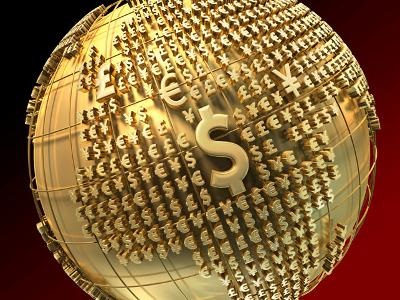 European banks continue to strive to not fall further behind. Revenues and costs in the first three quarters of 2019 were flat compared to their levels a year ago. Remarkably, interest income rose despite even lower interest rates. Loan loss provisions edged up from record lows. Net profits fell moderately but remained solid. Balance sheet growth was the strongest in years as banks fight to hold their ground against an array of new competitors. Along with the struggle to improve revenues, 2020 may be shaped by Basel IV implementation, continuing geopolitical risk and a fragile macroeconomy.
Revenues of the major European banks* 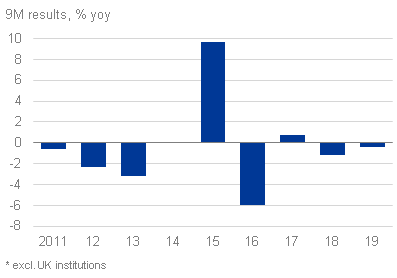 Sources: Company reports, Deutsche Bank Research
As we head into 2020, the European banking industry is looking back at a year of solid overall profitability and ahead to another year of unrelenting struggle against declining revenues and attacks on all sides from new rivals. The nine-month 2019 results of the 20 major institutions underscore this decidedly mixed picture. Revenues and costs were both flat year-over-year. The latter is particularly disappointing as banks failed to build on recent achievements on this front. Growth in net interest income continues to accelerate (+2.5%), as headwinds from negative interest rates and declining margins are more than offset by volume growth, which has also picked up remarkably. Total assets were up an impressive 7% yoy at the end of September (the strongest increase in years), risk-weighted assets (RWAs) were up 6% and total equity rose 5%. Lending has been one driver – in the euro area, outstanding loans by all banks to the private sector were 2.7% higher than the year before, the best figure since 2011. Higher derivative market values and repo volumes also contributed to the expansion of balance sheets.
The weak revenue contributors remain trading income (-15% at the largest European banks) and fee and commission income (-1%), despite much talk of a shift from interest income towards other, less interest-margin-dependent revenue sources. In contrast to recent years, banks have ceased to benefit from asset quality improvements. The tailwind from ever lower loan loss provisions has turned into a – minor – drag (+14%). Bottom line, the cost-income ratio edged up 1 pp to 63% and post-tax profits fell 15%, but from a fairly robust level as 2018 had been the best year for European banks since the financial crisis.
Banks are still adjusting their business models to the new regulatory framework. As this places more weight on risk-insensitive measures at the expense of risk-weighted capital ratios, it is no surprise that banks have focused on strengthening the (fully loaded Basel III) leverage ratio. It was down slightly last year but has now risen again, by 0.2 pp to 4.9% on average. At the same time, the fully loaded CET1 ratio declined 0.3 pp to 13.5%, though this is still a comfortable level. The decrease was also partly the result of tighter regulatory requirements in Sweden, which inflated RWAs. Organic capital generation (retained earnings after dividend distribution) at most institutions should be strong enough to allow for a gradual further build-up of the CET1 ratio if needed, at least as long as macroeconomic conditions do not deteriorate materially. An average Liquidity Coverage Ratio (LCR) of 150% (+2 pp) indicates substantial resilience even in the event of renewed financial market turmoil. But it also comes at a cost, given the ECB’s deposit rate of ‑0.5% (notwithstanding tiering, which provides moderate mitigation) and often negative yields in European bond markets.
What issues are likely to dominate European banks’ agenda in the next year? i) Stabilising and increasing revenues will certainly be among them. Nominal revenues remain below the pre-financial crisis level, a painful result. Headwinds from negative interest rates and margin shrinkage may be damaging and substantial, yet banks have little choice but to assume that the current environment will remain in place for many years to come. The ECB’s new leadership has indicated no change of course for the time being, and the subdued inflation outlook provides no support for it even in the medium term (expected inflation rate in the euro area in 2020: 1.1%, in 2021: 1.2%). ii) In the summer of 2020, the European Commission is expected to publish legislative proposals on how to integrate the final Basel III/Basel IV rules (which were agreed upon by the Basel Committee at the end of 2017) into European law. The output floor, i.e. the minimum level of risk-weighted assets based on the standardised approach, is likely to become a tight constraint for some banks that currently use internal risk models and where the gap between those models and the standardised approach is particularly large. Even though the implementation period will probably last until 2027, there may be foreshadowing effects and pressure from capital markets to comply as early as possible. iii) Geopolitical risk remains pronounced. The US-China trade war has reached a temporary truce but could easily re-escalate. Brexit will soon take place, and a cliff-edge, no-deal exit looms again for the end of 2020, when the transition period is supposed to end. iv) The European economy is still weak (expected GDP growth in the euro area in 2020: 1%, in 2021: 1.2%) and susceptible to a sudden slump due to external or internal shocks. v) It may have only been one sign of technology companies entering banks’ core business, but it was an attention-grabbing one: Facebook’s announcement last summer that together with its partners, it would establish a new global cryptocurrency, Libra, and a corresponding payment network. Though Libra has met with fierce resistance from central banks and supervisory authorities and might never see the light of day, in many other cases tech firms (both start-ups and established big players) have successfully captured bits and pieces of universal banks’ traditional value chain. This trend may only intensify in the coming years.
In this environment, European banks remain squeezed. They lack fundamental growth drivers and, in contrast to their US peers, are facing headwinds instead of enjoying tailwinds from monetary policy (negative versus positive rates), fiscal policy (tax cuts in the US), structural policy (fragmented capital market, no fully-fledged single rulebook even in the European Banking Union versus a single, integrated banking and financial market in the US) and regulation (significant impact from Basel IV versus partial relaxation of rules in the US). On the other hand, most European banks have become much leaner, are investing in new technologies, are operating with strong capital and liquidity levels, and have restored profitability to acceptable levels. Still, the outlook for European banks in 2020 looks more or less as challenging as the outlook in previous years.
Originalfassung in Englisch vom January 9, 2020: ˮEuropäische Banken: Schwieriges Jahr vorüber, schwieriges Jahr vorausˮ