WeiterAbbrechen
Erweiterte Suche


State subsidies for battery cell production: For information on risks and side effects, please do not consult
Eric HeymannMaximilian Volmer
Not least because they fear that the trend towards electromobility may cause losses in value added and job cuts in Germany, policymakers are debating subsidies for national battery cell production.
Region
Germany
Reihe
Talking Point
PDF 182K

State subsidies for battery cell production: For information on risks and side effects, please do not consult policymakers or recipients of incentives

Maximilian Volmer
maximilian.volmer@db.com
www.dbresearch.com
Deutsche Bank Research Management
Stefan Schneider
Not least because they fear that the trend towards electromobility may cause losses in value added and job cuts in Germany, policymakers are debating subsidies for national battery cell production. From a regulatory perspective, supporting local manufacturing would be dubious and comes with high economic risks. On princi-ple, German automakers ought to be better judges than policymakers, both with regard to the indispensability of battery cell manufacturing in Germany and its long-term profitability. The state is not needed, at least not as a source of subsidies.
In the years ahead, the share of electric vehicles in passenger car sales is likely to rise in many key auto markets, largely driven by stricter CO2 emission limit values for new cars. Under the new rules, the EU agreed that CO2 emissions per passenger car shall be 37.5% lower by 2030 than in 2021. Clearly, these targets will not be achieved without the adoption of alternative propulsion technologies. For policymakers and, increasingly, the automotive sector, electric mobility is taking centre stage. Many governments grant subsidies to purchasers of electric vehicles, and the respective charging infrastructure is also frequently supported. At the same time, the automotive industry's investments in technological progress run into billions of euros every year, even though profits per electric car sold fall short of those for traditional vehicles.
To date, battery electric cars have almost exclusively achieved substantial market shares where they are supported by high subsidies (e.g. Norway) or where vehicles with combustion engines are subject to strict regulation (e.g. China). On German roads, EVs continue eking out an existence as niche products. In 2018, battery electric cars or plug-in hybrids accounted for only 2% of new passenger car registrations. Private consumers, in particular, are as yet reluctant to buy EVs, although the purchase of electric cars is also supported in Germany, by both the government and manufacturers. Whilst long delivery times of some electric cars, in conjunction with the to-date relatively small supply, are also playing a role, low market penetration of EVs can so far above all be traced to the demand side. From today's perspective, it is difficult to say how sharply market shares will increase in the years ahead. If the CO2 limit values are to be achieved in 2030, roughly one-third of new passenger cars would have to be fully electric.
The structural changes in the sector will lead to a shift in the automotive value chain. Combustion engines, transmissions, exhaust systems and other (high-end) parts are not needed in battery electric cars. Ceteris paribus, a substantial share of value added in the automotive industry will hence be lost to the producers of battery technology. Today, the latter are primarily located in Asia, where just a few manufacturers account for around 90% of global battery cell production.
Given the crucial role of automotive industry in Germany and its strength in the combustion engine segment, there is an ongoing debate as to whether Germany needs its own battery cell manufacturing to offset the imminent losses in value added and job cuts. The federal government has, as a consequence, earmarked 1 billion euros to support production of battery cells in Germany. More than 30 companies have recently applied for subsidies from this fund, including automakers, suppliers and battery producers.

It is reasonable, from a political point of view, that the federal government considers promoting battery cell production in Germany. Who, after all, wants to be accused of standing on the sidelines when faced with potential job losses in a key industry? From the regulatory perspective, however, subsiding local production seems dubious and comes with substantial economic risks:

Automotive industry should decide for itself, based on economic considerations

On principle, German automakers ought to be better judges than policymakers, both with regard to the indispensability of battery cell manufacturing in Germany and its long-term profitability. A singular one-billion state subsidy – if not followed by further incentives – should not influence the general judgment. Prior to prospects of national production funding, companies' enthusiasm was rather muted resp. initial production rollouts failed. There were probably good economic reasons for this lack of vigour. If these grounds no longer hold water, it would be in the hands of German industry to reset the stage. The state is not needed, at least not as a source of subsidies. Furthermore, German industry ought to have more conclusive answers than the government when it comes to deciding whether activities such as materials research, system integration or other electromobility-related operations may outperform local battery cell production in terms of profitability. Although Asian producers have a headstart in battery cell manufacturing, no company has an unassailable lead with regard to electromobility as a whole. It is also noteworthy in this context that the path to electromobility is evolutionary, as global demand for cars with combustion engines – including plug-in hybrids – will continue to pick up in the years ahead. Thanks to this evolutionary nature, there is room for adjustment.
Ultimately, a fundamental problem of German and European climate policy is that it not only defines the climate targets but also specific instruments (e.g. subsidies, limits, bans, quotas), thereby running the risk of setting the technological path on which these targets can be achieved. This approach undermines the efficiency and effectiveness of climate policy. Economists have therefore been calling for more market-based instruments (e.g. expansion of emissions trading or CO2 tax) for many years.
Electromobility still a niche sector 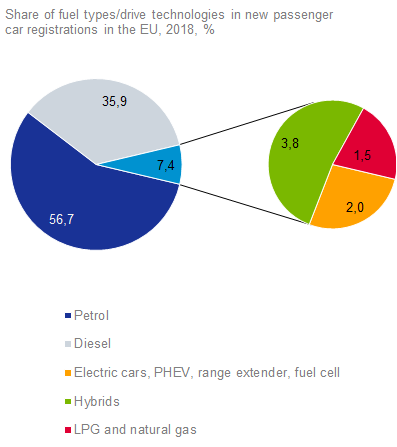