Marcel Stechert
marcel.stechert@db.com
www.dbresearch.com
Deutsche Bank Research Management
Stefan Schneider
Steady growth in air transport is leading to capacity bottlenecks, both in terms of available planes and at individual airports. Capacities will need to be increased, which means that more money must be earmarked for fixed-asset investments as well as labour and operating expenses. Taken together, the growing pains in the aviation sector and the rise in jet fuel prices may prove an overwhelming chal-lenge for some market participants. Air transport growth has also resulted in higher capacity utilisation in related sectors, such as tourism (the “overtourism” phenomenon comes to mind). There are, in fact, discussions about limiting or redirecting visitor flows.
International aviation is booming. Global passenger air travel looks set to expand by almost 7% p.a. on average between 2003 and 2018, as households increasingly like to travel. This trend is supported by rising incomes and the long-term decline in real air travel costs. Only a few decades ago, flying was regarded as pure luxury. By now, however, air travel has become affordable for the middle class, which is growing around the world. Fierce competition between the airlines, more efficient aircraft, a larger number of flight connections, the expansion of airport infrastructure and better transparency of fare prices thanks to online portals have contributed to this development. At the same time, business travel has been growing quite steadily on a global scale.
Global aviation sector is growing quite steadily 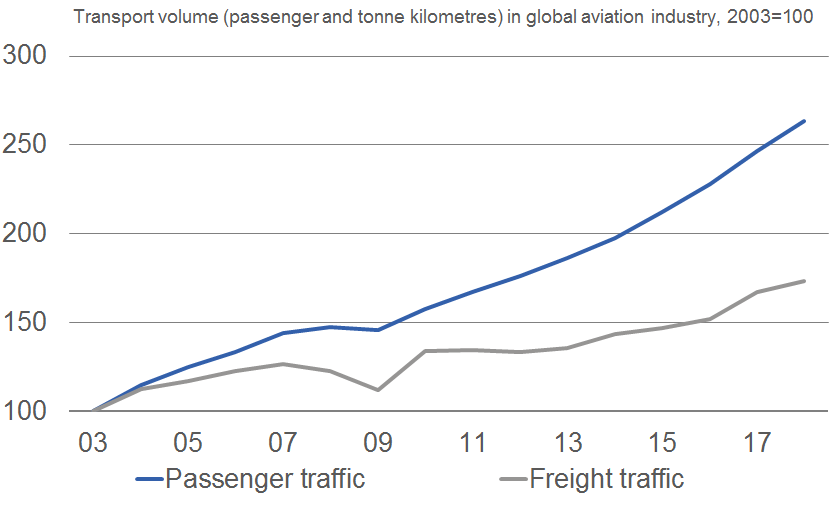 Source: IATA
In recent years, air transport has grown at above-average rates in the Middle East (by c. 10% per year between 2011 and 2018) and in the Asia-Pacific region (+8.5% p.a.). For the Middle East, this development can be explained by the quick expansion of Gulf airlines and airports. And in Asia-Pacific, air travel is propped up by the wide-spread uptrend in local incomes and pent-up demand for air travel. In North America, air transport has been growing at a much lower rate since 2011, at just above 3% p.a. The US in particular are a relatively mature market, as flying has been a common means of transport for decades. In addition, consolidation between airlines has already made considerable progress in North America. And less fierce competition tends to reduce the number of flight connections and downward pressure on fares. In fact, airlines have made considerably higher profits in North America than in other regions during the last few years. In Europe, air transport growth has been only slightly below the global average since 2011, which is remarkable, seeing that the market is already quite mature.
North American airlines generate high yields 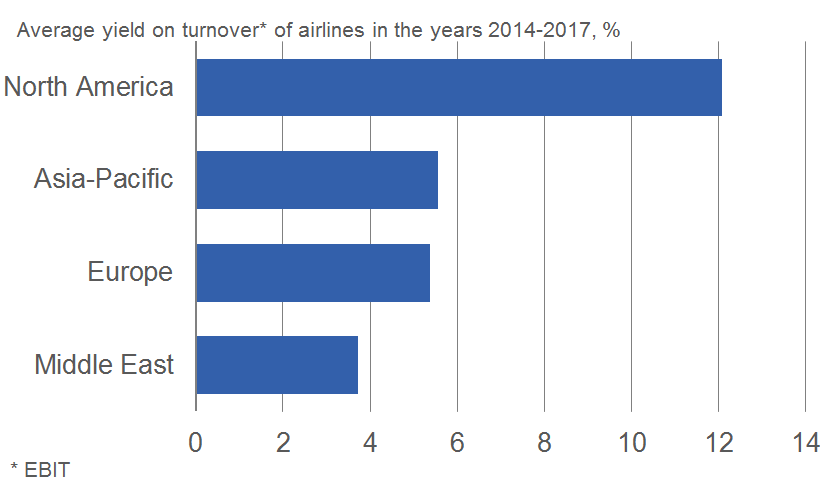 Source: IATA
Significant increase in capacity utilisation
Even as transport volume in international aviation has risen, capacity utilisation has increased steadily over the last few years as well. For example, the global average passenger load factor recently amounted to more than 81%, i.e. 10 pp more than 15 years ago. In Germany and Europe, insolvencies of several internationally active airlines boosted capacity utilisation for the remaining airlines in 2017. However, expansion of air transport volume slowed in 2018, because a number of planes were temporarily unavailable. During the summer of 2018, capacity bottlenecks at numerous airports caused flight delays and flight cancellations. Strikes, restrictive operating times at a number of airports, security check bottlenecks and singular events such as extreme weather conditions made the situation even more difficult. Overall, the number of airport passengers in Germany is expected to grow “only” by 3% this year, down from 5% in 2017.
Capacities are well utilised 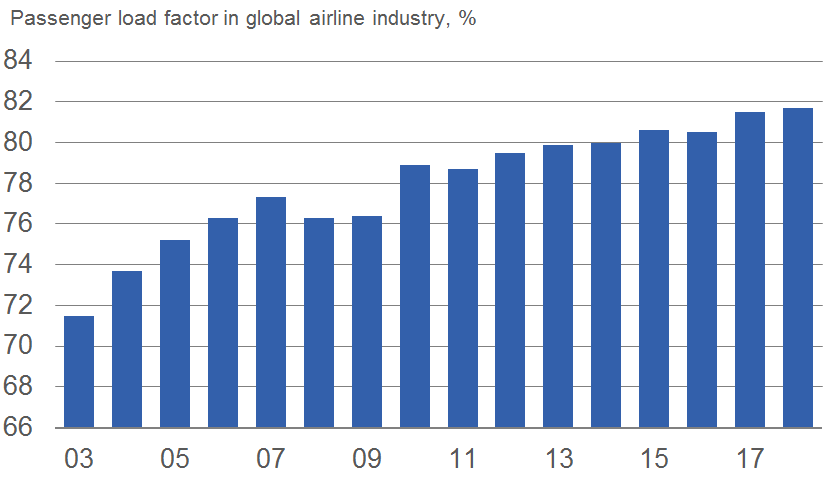 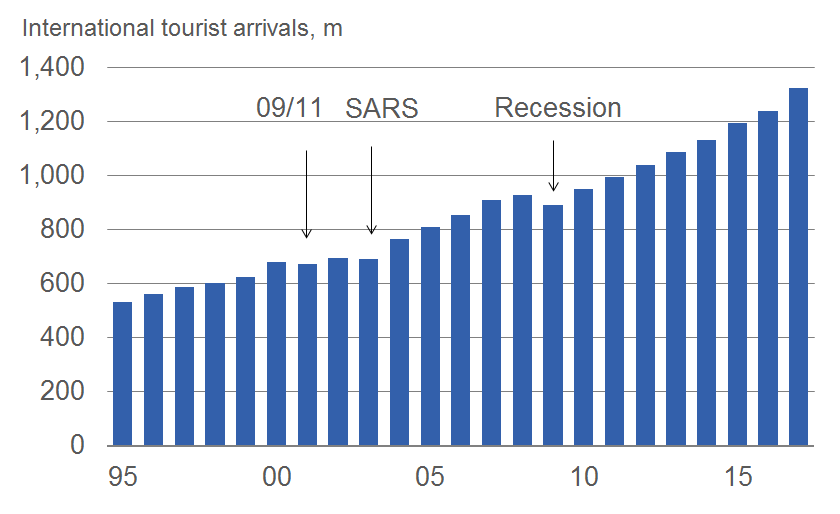 Source: UNWTO
To some extent, the overtourism phenomenon is caused by the fact that flying has become affordable or even cheap. At the beginning of 2018, low-cost carriers had a share of roughly 30% in overall air travel in Europe, up from 24% at the beginning of 2011. Of course, other factors contribute to overtourism, too, for example online portals which have specialised in providing private accommodation. As a result, the supply of relatively cheap accommodation has ballooned in many cities – and intensified bottlenecks on the local housing markets. In addition, more and more people go cruising. However, residents of popular coast towns have become skeptical about cruise tourists, who tend to come on shore in droves, but do not spend much locally.
Still, any efforts to limit or even scale back tourism are a tightrope walk for the economies of these cities and regions. The World Travel & Tourism Council recently found that holiday or business travel often makes up a high single-digit or even two-digit percentage of a city’s local GDP. In addition, numerous people work in tourism-related sectors. It will not be easy to find a compromise between the contrary interests of the local tourism industry and the people suffering from overtourism.
Sector growth runs counter to climate protection goals
The expected expansion of the aviation and tourism sectors runs counter to international climate protection goals, at least as long as it is based on the currently available technologies. If policymakers were really serious about their official climate goals, they would have to take much stricter measures to limit air transport growth. So far, however, they are not willing to tell their voters that this is necessary. And remember that carbon emissions from international aviation are not allocated to the emissions budgets of individual countries. Ultimately, it would probably not go down well with voters if air travel became so expensive that only prosperous people could afford it. Outside Europe, not many regulatory measures have been taken to reduce the negative environmental impact of air transport.
CO2 emissions of aviation industry on the rise 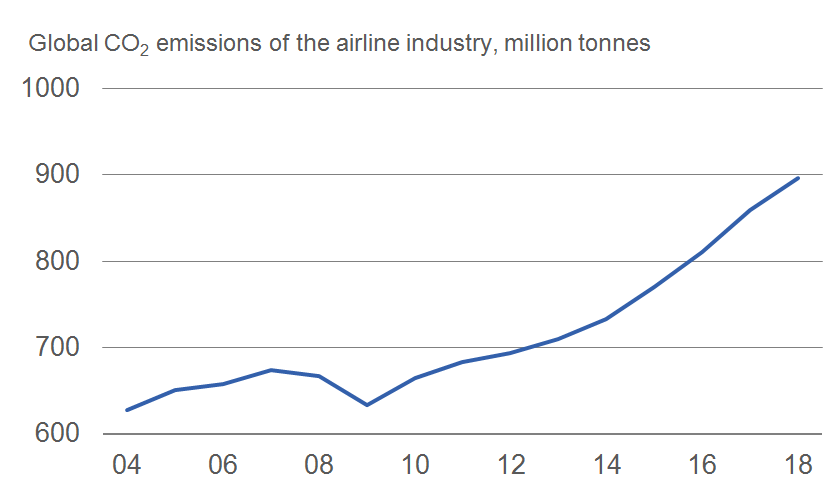