Jan Schildbach
Analyst, Team Head
+49(69)910-31717
jan.schildbach@db.com
www.dbresearch.com
Deutsche Bank Research Management
Stefan Schneider
The European banking industry remains in restructuring mode. Most institutions are focused on increasing profitability and returns to shareholders. In contrast to previous periods of rising net income, the key this time is exiting less attractive parts of their business rather than expanding across the board. Hence, most P&L and balance sheet components have declined year-over-year, with one major exception: profits. Capital levels have suffered from new, more conservative accounting rules on loan loss provisions.
A full decade since the peak of the financial crisis, the European banking sector is still in shrinking mode. In H1 2018, almost all P&L and balance sheet figures were down again compared to a year ago. The total revenues of the 20 largest banks were 2% lower, in line with the declines in net interest income (-2%), fees and commissions (-3%) and trading income (-1.5%). The fall in interest income was due to increasing pressure on the interest margin, as volume growth has finally picked up somewhat. Outstanding loans to non-financial corporations in the euro area were more than 1% higher in June than 12 months before, and retail loans were 2.5% higher, resulting in 2% loan growth with the private sector on aggregate. The mildly positive volume effect so far, however, has been unable to compensate for the increasing drag on net interest income from zero and negative rates. In addition, competition has intensified significantly in recent years. According to the bank lending survey, euro-area banks have reported shrinking margins, especially on average corporate loans, every single quarter since Q2 2013 – a record 21 consecutive quarters. No wonder the banking industry in Europe is eagerly awaiting the end of quantitative easing (scheduled for the end of this year) and rising interest rates (expected for late next year).
Net interest income 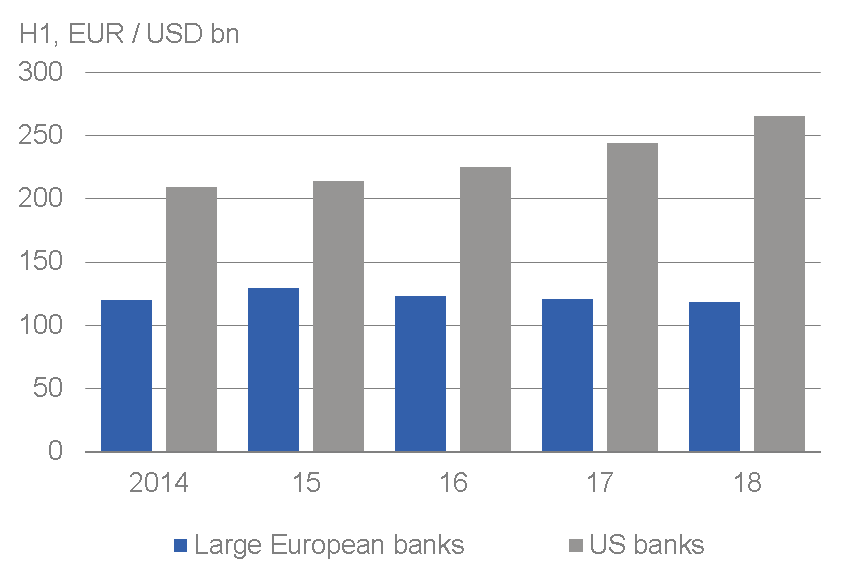 Sources: FDIC, company reports, Deutsche Bank Research
Revenues are also shrinking because banks are actively reducing exposure to less attractive markets and market segments and managing costs more tightly than in the past. Consequently, administrative expenses at the top 20 institutions fell 2% yoy. A similar impact is visible on the balance sheet, where total assets, risk-weighted assets and total equity all declined by 1%. In the latter case, this was partly the result of a change in accounting rules at the beginning of the year. IFRS 9 introduced a forward-looking provisioning regime based on expected rather than incurred loan losses. Accordingly, there was a one-off jump in provisions, which led to a meaningful decrease in banks’ equity base even though it spared the P&L.
Growth in equity capital has also disappeared, at least temporarily, as banks are focusing more on shareholder returns and have increased their dividends. This became possible thanks to a further rise in profitability, with net income up another 9% from a solid H1 2017 figure. The poor revenue performance was more than made up for by greater cost discipline and a further drop in ongoing loan loss provisions (-34%), even from an already very low level. Asset quality, especially in Italy and Spain, continues to improve. In addition, several banks have sold substantial amount of bad debt to investors in recent months, which has provided balance sheet relief. Including these transfers, the NPL ratio in Italy has nearly halved from a staggering 18.2% at the peak in Q3 2015 to 9.9% in Q2 2018.
Increased distribution of funds to shareholders has also come at the expense of the further strengthening of capital ratios. This is no serious concern, as most banks now have comfortable buffers, but it shows the limits of higher dividends and share buybacks (as well as of organic growth and risk-taking). On average, the fully loaded Basel III CET1 ratio is 13.7% and thus unchanged from a year ago; the fully loaded leverage ratio remained flat at 4.8%.
How do European banks currently compare to their US peers? While profitability at the large European banks has risen, with net income after tax reaching EUR 48 bn in the first half of the year (which had relatively few distortionary one-off effects), the transatlantic gap has widened even further. The US banking sector – which in total is roughly comparable in size to the major European banks – earned a massive USD 116 bn in the same period of time. The jump of 26% yoy is partly due to lower taxes thanks to the large-scale tax rate cuts taking effect at the beginning of this year. But it is also driven by impressive revenue development, something virtually unseen in Europe since the financial crisis. Particularly, net interest income is surging and has gained 9% over the past year alone. Of course, both volume and margin developments are supportive, with loan growth being robust and rate hikes by the Fed gradually pushing the interest margin upwards. One of the most interesting things to watch in the next few years will be the extent to which European banks will be able to benefit from a similar turn in the rate cycle on their home turf.
Online Document "PROD0000000000446945" not found.
13.10.5