Eric Heymann
Analyst
+49(69)910-31730
eric.heymann@db.com
www.dbresearch.com
Deutsche Bank Research Management
Stefan Schneider
Nitrogen oxides emissions (NOx) in Germany plunged by 44% between 1995 and 2016. Road traffic recorded the sharpest decline (-62%). After the decision of the Federal Administrative Court in Leipzig, however, certain diesel vehicles can be banned from inner cities. Apparently, there is a conflict of interests between the human right to clean ambient air and the protection of diesel car owners against an erosion of their vehicles‘ value. In our view, this conflict could be resolved over time. To this end, policymakers could, for instance, introduce a Blue Badge for low-emission diesel passenger cars, which is tied to a transitional period for older vehicles.
According to the German Federal Environment Agency (UBA), nitrogen oxides emissions (NOx) in Germany in 2016 were down by 58% from the level recorded in 1990. Compared with 1995, they still decreased by 44%, marking the lowest level of nitrogen oxides air pollution witnessed in recent German history. This positive evolution is the result of several factors, including regulatory targets (e.g. limit values for nitrogen oxides emissions) and the technological progress (e.g. improved combustion processes). Of the major emission sources of nitrogen oxides, road traffic posted the strongest declines over the past 20 years (2016 vs 1995: -62%), whereas reductions in other areas as, for instance, the energy sector (-12% in the same period) were relatively modest. From 52% in 1995, the contribution of road traffic to total nitrogen oxides emissions in Germany declined to 35% (2016). It thus continues to be the main source of nitrogen oxides emissions, with diesel-powered vehicles accounting for the lion’s share.
Road transportation is making progress 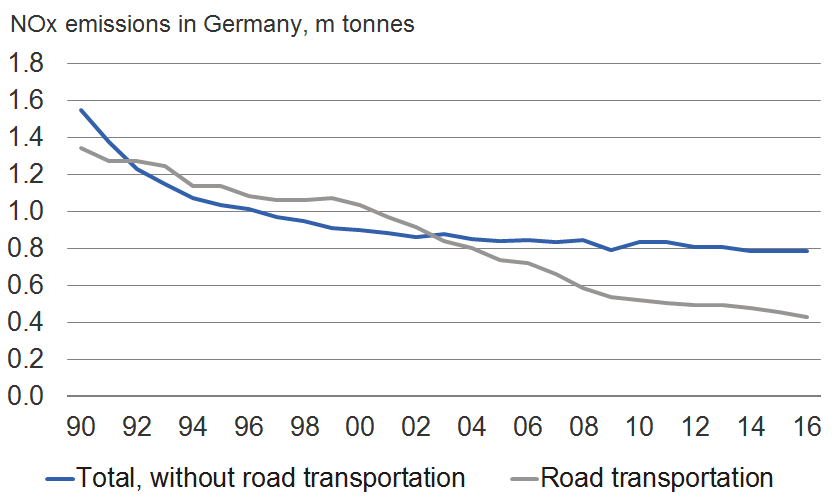 Source: Federal Environment Agency
In the face of this, in general, positive evolution, the intensity of the debate over the regulation of diesel cars in recent months seems somewhat surprising at first glance. But there are good reasons. Based on the UBA’s preliminary data for 2017, nitrogen dioxide (NO2) emissions in 70 municipalities exceeded the limit value of 40 micrograms per cubic metre set in 2010. Admittedly, the number declined by 20 compared with the previous year. Still, this is 70 municipalities too many – assuming that the limit value is well-chosen. At measuring stations located near traffic areas, pollution was particularly high.
Apart from adding to its intensity, the diesel scandal is also a source of highly emotional debate. Consequently, the brunt of the blame that the diesel has come under public fire lies with the automotive industry itself. Naturally, the diesel scandal has stoked ambitions of some political parties and NGOs to do away with diesel vehicles as a matter of principle, and, with more than 15 million diesel cars on Germany’s roads (one-third of the fleet), the media also have a strong interest in the issue. Furthermore, the Federal Administrative Court in Leipzig recently ruled that municipalities have the right to ban certain diesel cars. Following from its coalition treaty, the new government, on the other hand, wants to avoid such restrictions, if possible. Instead, it puts the focus on alternative measures (e.g. upgrades for vehicles in the existing fleet – whenever technically and economically feasible – and the promotion of electromobility and local public transport).

Due to the current regulatory vacuum surrounding the diesel issue, the average buyer of a new car takes a cautious approach. With demand thus shifting from diesel vehicles to, above all, petrol-driven cars, the diesel share of new car registrations in Germany declined for the third year in a row in 2017, down to just under 39%. Private car buyers, in particular, are reluctant to buy a diesel. In 2014 and 2015, the diesel share still came to around 48% in Germany and has also decreased in many other EU countries over the past years.
All actors realise that the regulatory stalemate cannot be in the interest of the car buyers resp. drivers, nor is it beneficial to automotive industry. For now, however, a swift solution is not on the cards, as illustrated by the discussion about the Blue Badge for cars with relatively low NOx emissions. Granting ban exceptions to the owners resp. buyers of these cars, it would take a lot of pressure off the heated diesel debate. As a consequence, the diesel share’s decline in the passenger car segment could slow (in the volume segment, the downtrend is likely to continue anyway in the years ahead, due to the stronger impact of higher diesel technology costs on sales prices). Without a Blue Badge, however, cars would be subject to possible driving bans, even though that is not what the buyers expected when purchasing a diesel. Some drivers of diesel cars would hence face severe impairments resp. an erosion of their cars’ value. As older cars, in particular, would not be eligible for a Blue Badge, the issue would also have socio-political implications, given that older vehicles are on average driven by low-income households. Upgrades of very old vehicles would probably be classified as „not justifiable from an economic perspective“.
Diesel share in the EU is declining 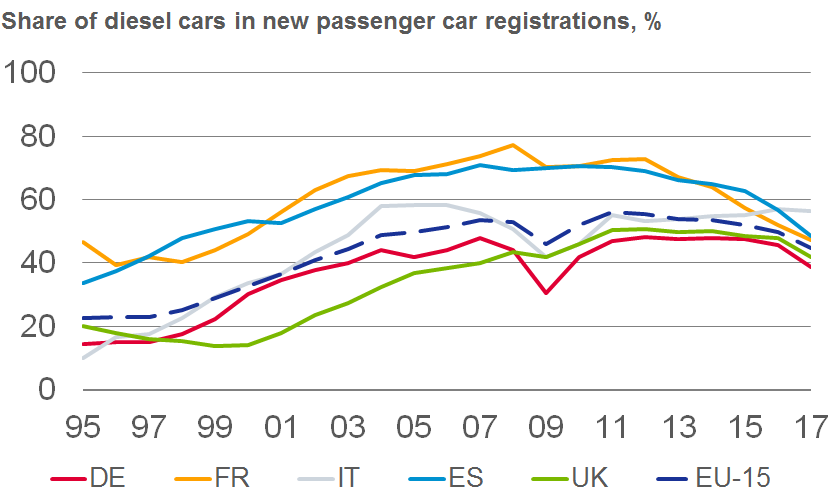 The likelihood of inner-city driving bans for certain diesel cars had already increased prior to the Leipzig ruling. A patchwork of different local regulations is hardly desirable – for persons, at least, who have no fundamental misgiving about cars. What if the problem were resolved over time? German policymakers could, for instance, decide to introduce a Blue Badge for low-emission diesel cars from 20XX onwards. Measuring the respective emission values in real-driving situations would be compulsory, as well as emission tests in the context of the general inspection. To protect legitimate expectations of the owners and avoid socio-political frictions, the introduction could be accompanied by an appropriate transitional period for older cars. Recently, the CDU also brought into play higher carmakers’ premiums for customers switching to lower-emission cars (alongside the already decided software update). When the transitional period comes to an end, the market share of alternative drive technologies should have also increased (further), thanks to the enhanced competitiveness vis-à-vis diesel and petrol-driven cars.
Admittedly, this proposal is unlikely to resolve the problem overnight. But such a compromise would not really be surprising, in many areas, including German politics. One factor corroborating this view is that the air is much cleaner today than it was 10 or 20 years ago. What is more, diesel cars in the cities are not the only source of nitrogen oxides (public transport buses and commercial vehicles, industry, heating systems, construction sector resp. construction machines, etc.). Apart from likely being limited in terms of time, driving bans would also be restricted to certain roads/urban areas. Nor would all diesel cars be affected. It should be noted in this context that the permissible NO2 exposure limit in the workplace is 950 micrograms per cubic metre, well above the 40 microgram limit allowed in the ambient air.
Ultimately, resolving the problem over time might help to mitigate the conflict of interests between the human right to clean ambient air and the protection of diesel car owners against an erosion of their vehicles‘ value, the more so as the diesel technology has advantages for certain customer groups and various vehicle categories – despite the current damage to its image and the loss of confidence. With respect to the emission values of vehicles, however, regulators have to be more watchful from now on, as is clearly illustrated by the experiences of recent months.
Originalfassung in Englisch vom March 14, 2018: ˮDrohende Fahrverbote in Zeiten sinkender Stickoxidemissionenˮ