German industry at its cyclical peak

Eric Heymann
Analyst
+49(69)910-31730
eric.heymann@db.com
www.dbresearch.com
Deutsche Bank Research Management
Stefan Schneider
German manufacturing industry ought to be at the peak in the current cycle. Domestic production in 2017 edged up by 3% in price-adjusted terms, which marks the strongest increase since 2011. At the same time, producer prices (+2.3%) also recorded the sharpest increase since 2011. Although industrial order intake continues to be very dynamic, several factors, including the strong euro and the recent slight dip in business expectations, suggest that growth momentum is likely to slow in the course of 2018. Against this backdrop, German industrial production looks set to rise by 2.5% in 2018. In the face of high wage settlements and plans to lower the limit on fixed-term contracts, German companies are likely to create fewer new jobs.
Rising by 3% in price-adjusted terms, German manufacturing production in 2017 picked up more sharply than was expected a year ago. This marked the fourth increase in a row and, at the same time, the steepest rise since 2011. In the last two months of 2017, in particular, industrial production was running at high levels.
Orders are gaining momentum 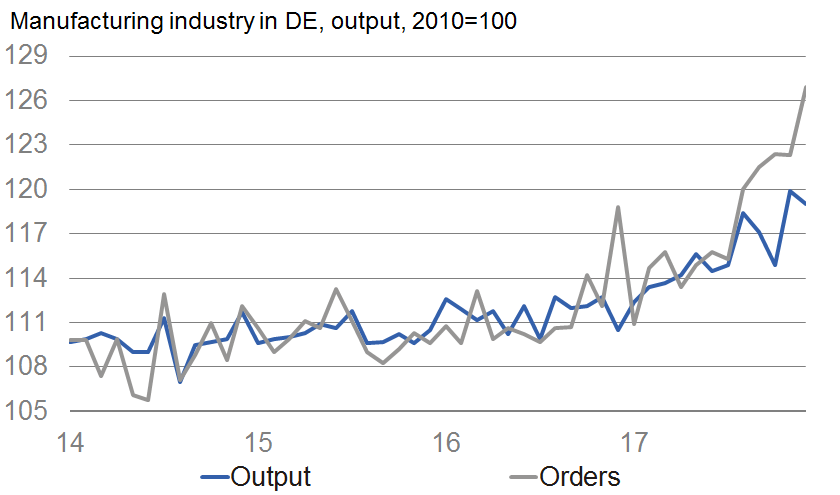 Source: Federal Statistical Office
At around 5.5% each, electrical engineering and pharmaceuticals reported the strongest production gains of the key industry sectors. In the metal and plastics industries, output was up by some 4%, whereas the automotive sector and mechanical engineering expanded production by around 3%. All of the above-mentioned sectors enjoyed the strongest outturn since 2011 (at least). Another positive is that domestic output in the chemical industry – the biggest cyclical concern of German manufacturing – also inched up by 2% in 2017, after having shrunk in each of the years between 2014 and 2016.
In line with the positive growth story, producer prices in the manufacturing sector were up by 2.3% in 2017. Whilst this was the first uptick in manufacturing producer price inflation since 2013, it should be noted that the key price drivers were the commodity-based sectors (metal production, chemicals).

Solid growth prospects for 2018, but momentum likely to slow

The prospects for manufacturing production in 2018 are favourable. New orders, for instance, continue to point to the upside. Moreover, capacity utilisation in the first quarter of 2018 climbed to the highest level since the beginning of 2008, which argues for higher capacity-increasing investment, and the ifo business climate index is at a record high, with companies particularly upbeat about their c urrent business situation. Serving as a very solid starting point for 2018, the above-mentioned high level of production at the end of 2017 is providing support from the statistical side.
High capacity utilisation 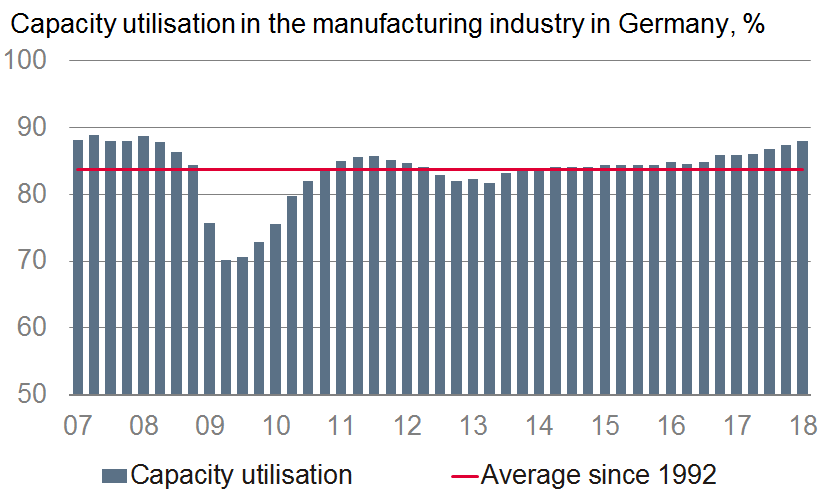 Source: ifo institute
But some factors, as, for instance, the appreciation of the euro versus the currencies of major trading partners, suggest that production growth is likely to lose some steam in the course of 2018. At the end of 2017, the trade-weighted euro was up by 6% on the same period a year earlier. In 2018, the strong euro ought to weigh on the German export outlook. Furthermore, ifo business expectations were scaled back for two consecutive months, but clearly remain in positive territory. The strong wage increases in the metal and electrical engineering sector (including the option to temporarily reduce working hours) will be painful for German companies, particularly in terms of cost. Given high capacity utilisation and well-filled order books, however, their adverse effect on production should be limited. But companies will arguably be more cautious when hiring new personnel, the more so as further payroll gains are restricted by a lack of qualified labour in some areas and regions. In this environment, the order backlog is, at least, unlikely to be processed more quickly than in a situation with higher labour supply. Moreover, the plans to lower the limit on fixed-term contracts, which make it easier for businesses to give lateral entrants a chance, ought to weigh on the creation of new jobs.
Let me repeat: The economic environment for German industry is favourable, nationally and internationally. A recession is not in sight, although financial market volatility has increased of late in the face of the imminent monetary policy reversal and higher inflation expectations. Relative to 2017, however, the uptrend of German industrial production ought to flatten in the course of 2018. Still, real output growth in 2018 looks set to be solid at 2.5%, not least thanks to the high starting point. Against this backdrop, German industry ought to be at the peak in the current cycle.
Originalfassung in Englisch vom February 12, 2018: ˮDeutsche Industrie auf dem Höhepunkt im Konjunkturzyklusˮ
Online Document "PROD0000000000446945" not found.
5.0.0