Jan Schildbach
Analyst, Team Head
+49(69)910-31717
jan.schildbach@db.com
www.dbresearch.com
Deutsche Bank Research Management
Stefan Schneider
The Basel Committee’s recent agreement on final capital rules for global banks is set to have only limited effect on overall capital requirements, but will impact EU banks more strongly than their peers. In recent quarters, European banks have already strengthened their capital ratios substantially and have become more profitable, thanks to moderately better revenues, lower costs and lower loan losses. Balance sheet size and risk-weighted assets have declined, underscoring the continuing lack of growth momentum in the industry. This might change somewhat next year, as European banks could benefit from the strong performance of the economy via a pickup in lending, which so far has remained sluggish. Further tailwinds from declining loss provisions and falling expense levels are less likely though.
Last week, the Basel Committee agreed on the final set of capital rules for banks across the globe, dubbed Basel 3.5 or Basel IV. This concludes the coordinated effort by bank supervisors and central banks to reform prudential standards in wake of the financial crisis of 2007-09. The package includes, among other things, revisions to the standardised approach for measuring credit risk, a reduced role for internal models, a new output floor which limits the potential benefit from internal models compared with the standardised approach, and the introduction of an additional leverage ratio buffer for global SIFIs (systemically important financial institutions). For the banking industry as a whole, capital requirements are not meant to rise. In fact, for a sample of more than 100 large global banks, the CET1 ratio is expected to increase slightly under the new rules rather than decrease, according to the Basel Committee’s impact study. Nevertheless, some individual banks will face core capital shortfalls which, for the global aggregate, amount to EUR 28 bn – a relatively modest sum. The impact will be felt more strongly in Europe though. For the 36 largest EU banks, the new framework will result in a decline in the CET1 ratio of 0.7 pp and in a capital shortfall of EUR 16 bn, the EBA’s impact assessment shows. This is not surprising given that European banks use internal ratings to a greater extent than their US peers and are thus more affected by the output floor. In addition, their leverage ratio tends to be lower, i.e. the non-risk-weighted ratio between Tier 1 capital and adjusted assets.
Capital growth has resumed at the leading European banks 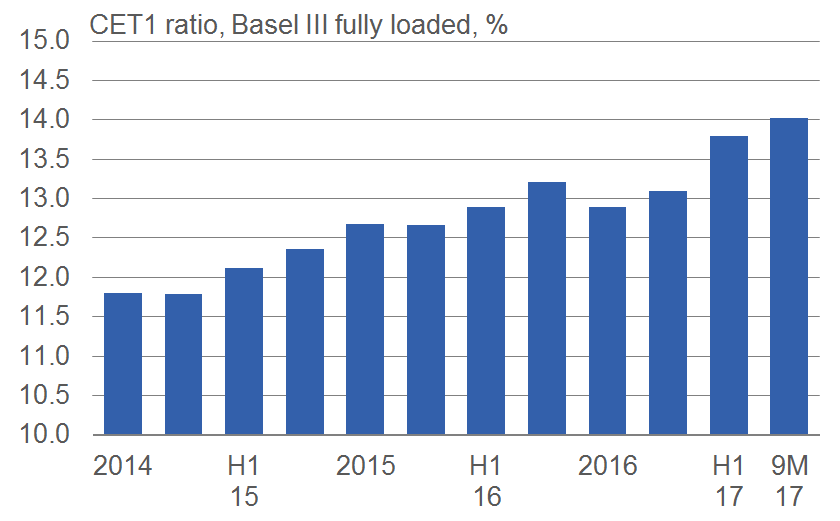 Sources: Company reports, Deutsche Bank Research
At the same time, the overall impact seems to be manageable even for the Europeans. First, the Basel Committee proposes lengthy transition periods. The output floor is not supposed to be fully implemented before 2027, i.e. 20 years after the beginning of the financial crisis. It also remains to be seen whether all jurisdictions will apply the Basel standard to the letter. In the past, the political process required to put the rules into effective national legislation has sometimes led to substantial deviations, additions and omissions from the original Basel Accord. Furthermore, the EBA’s judgement relies on end-2015 data and European banks have since made substantial progress with regard to their capital levels. The 20 largest institutions have strengthened their fully loaded Basel III CET1 ratio by an average of 1.3 pp since 2015, reaching 14% at the end of September 2017. And internal capital generation has improved in recent quarters. Net income at the major European banks rose by 24% yoy in the first nine months of the year. This was driven by a combination of three factors: i) Total revenues were up 2%. While net interest income was flat, fees and commissions rose 5%, and trading income partly recovered from last year’s slump (+13%). ii) Operating expenses were 1% lower than 12 months ago. iii) Loan loss provisions continued their prolonged decline, falling another 6%. Profitability-wise, European banks are on track to achieve their best result since the financial crisis. Importantly, however, revenues have made up only part of the drop they suffered last year, and are still below the comparable 2010/11 figures.
Stronger capital ratios are not only due to higher profits. They are also a consequence of sustained de-risking and shrinking. Both total assets and risk-weighted assets were down 2% yoy, while the equity base increased by 3%. The leverage ratio climbed 0.2 pp to 4.8% on average, although several banks may not have reached their steady-state level yet. There are still a number of institutions which do not report the Liquidity Coverage Ratio. But for those that do, the LCR has risen 9 pp to a solid 149% on average.
Where is the European banking industry heading in 2018? It may well see further profit growth, due to an improving revenue picture, while expenditures could also start to pick up again. A meaningful additional reduction in loan loss provisions is unlikely, as they are very low already. Balance sheet developments will probably be in greater focus than today, as loan growth might eventually re-emerge, not least in light of strong macroeconomic performance: the euro area is expected to reach 2.3% (real) GDP growth this year and next – the best since 2007. So far, lending by all EMU banks remains subdued, with loans to companies flat since 2014 and loans to households 2.8% higher yoy. But with firms starting to invest more, and with lower unemployment boosting private consumption, lending in the euro area – and bank asset growth as a whole – might finally turn the corner in 2018.
More information: Where do European banks stand? 10 years after the start of the financial crisis
Online Document "PROD0000000000446945" not found.
6.8.1