Eric Heymann
Analyst
+49(69)910-31730
eric.heymann@db.com
www.dbresearch.com
Deutsche Bank Research Management
Stefan Schneider
The manufacturing sector's stock of foreign direct investment (FDI) added up to some EUR 251.1 bn in Germany in 2013. This is equivalent to more than 27% of total German FDI. The data is collated on the basis of the specific business sector to which a German investor belongs. The statistics incorporate the following direct investments of domestic companies and private individuals: firstly, direct cross-border share capital or company voting rights of 10% or more. Secondly, stakes in foreign companies are taken into account if the directly and indirectly (that is via dependent holding companies) held share capital or voting rights exceed the 50% mark. 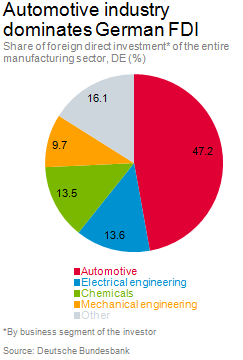 In 2010 the FDI stock of the German manufacturing industry was just about EUR 220.9 bn. The increase until 2013 was equivalent to an annualised average growth rate of nearly 4.4%. Within the manufacturing sector four industries are the dominant foreign investors. The automotive industry leads the way with a 47.2% share. Electrical engineering (13.6%) and chemicals (13.5%) come next. Mechanical engineering has a share of 9.7%. Of the major industries it is the automotive sector that has also recorded the fastest growth in foreign direct investment: an increase of 7.1% p.a. between 2010 and 2013.
Ultimately, the above-mentioned sectors that top the FDI rankings are the “usual suspects”. They not only invest particularly large amounts abroad, they are also the key pillars of Germany's export industry. In 2014 these sectors combined were responsible for 56.5% of all goods exported from Germany. The high foreign direct investment and the strong export figures indicate the global focus of the sectors concerned.