Patricia Wruuck
patricia.wruuck@db.com
www.dbresearch.com
Deutsche Bank Research Management
Stefan Schneider
One of the widely discussed patterns of the UK-referendum vote is its demographic distribution. Some surveys find that voters older than 65 were more than twice as likely to have opted for “leave” than those younger than 25 years.* Demographic differences with respect to perceptions of Europe are not unique to the UK. 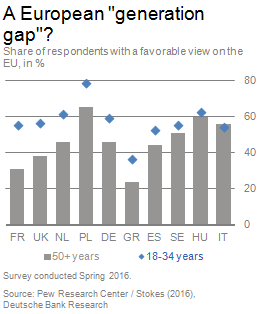 A recent poll surveying people in 10 EU countries similarly suggests young people tend to have more favorable views on the EU than older respondents (here defined as + 50 years). In six out of ten surveyed countries, the “generation gap” is actually larger than 10 percentage points. Italy stands out in two respects: First, it shows virtually no difference between “young” and “old” respondents (55% and 56% with favorable views). Second, here it is actually the “mid-aged” bracket which states more positive attitudes towards the EU (63% for 35-49 year olds) than both the younger and the older generation. This is unusual because regardless of cross country differences in levels of EU favorability, the share of respondents with positive views typically decreases with age.**
Similar patterns can also be observed in Eurobarometer polls: For example, 59% of (very) young respondents aged 15-24 years in the EU28 cite the “freedom to travel, study and work” when being asked what the EU personally means to them. This is 10 pp more than the average across all age groups (49%) and clearly higher than among people older than 55 years (42%).***
What drives differences in perception and evaluation of the EU across generations? Several points need to be considered here. First, some of the benefits associated with the EU may be judged differently contingent on age. To some extent, this seems to be the case for the “free movement to travel, work and study in the EU” which may be intuitively appealing and valuable for many youngsters who (plan to) benefit from it, for instance when going to study abroad. In fact, this has hardly changed over the years and responses to the same question about ten years ago show an almost identical pattern.**** Second, the question about whether people have favorable opinions on the EU is a fairly broad one. As a standalone, it does not provide insights to the drivers of (less) favorable views. However, it is plausible to link overall judgement of the EU to some of the issues people tend to associate with it. Here, a parallel glance at the Eurobarometer suggests that those older than 55 are more likely to link the EU to some rather negative things like “waste of money” (29% compared to 15% of 15-24 year old respondents), “bureaucracy” (27% compared to 13%) and “insufficient control of external borders” (28% compared to 16%). Again, these differences are nothing new but it seems that they have become somewhat more prevalent in recent years.
* See for example YouGov  or Lord Ashcroft polls. It should be noted that there were no official exit polls for the UK EU-referendum, i.e. information on age distribution is based on surveys and estimates by polling companies on the day of the referendum vote. However, a similar „age cleavage“ has been noted prior to the referendum vote.
** See Pew Research Center / Bruce Stokes (June 7, 2016): Euroskepticism Beyond Brexit.
*** See Eurobarometer No.84 (Nov 2015).
**** In 2007 (Eurobarometer Vol. 67) 59% of young respondents (15-24 years) associated freedom to travel, study and work with the EU on a personal level and 43% of older respondents respectively (+55).
Englische Fassung vom July 11, 2016: ˮIst „Europa” eine Frage des Alters?ˮ