Eric Heymann
Analyst
+49(69)910-31730
eric.heymann@db.com
www.dbresearch.com
Deutsche Bank Research Management
Stefan Schneider
The manufacturing sector is one of Germany's biggest employers. On average, more than 5.2 million people were working in manufacturing in the first half of 2016. This represents an increase of 6.3% compared with the beginning of 2005 – and comes in spite of the deep recession of 2008/2009. In the period under review, job growth was particularly strong in mechanical engineering, the food industry, the rubber and plastics industry, and the metals industry. Expansion of employment in German industry has slowed recently, however. Because of the low rate of global growth and muted investment activity, employment in the industrial sector is likely to stagnate up to 2017 – albeit at a high level. 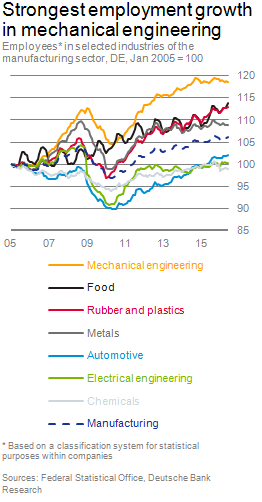 In June 2016 more than 5.2 million people were employed in the manufacturing sector in Germany, an increase of 0.8% on the prior year figure. Excluding typical seasonal fluctuations, this represents a continuation of the upward trend that began in mid-2010. At that time, the number of people employed in Germany's manufacturing industry had fallen to a low of just under 4.8 million in the wake of the global and national recession of 2008/2009. Thanks to the subsequent economic recovery the number of manufacturing employees in the first half of 2016 was up by around 9 % on the same period in 2010 and by 3.2% on the strong pre-crisis levels (first half of 2008). Other western European nations have not fared so well.
The chart shows the indexed number of employees in the seven largest manufacturing industries in Germany (by number of employees). At the top of the pile was mechanical engineering, with an average of around 900,000 employees in the first half of the year. Next came the automotive industry (760,000 employees), the metals industry (750,000), electrical engineering (624,000), the food industry (397,000), the rubber and plastics industry (331,000) and the chemicals industry (291,000; excluding pharmaceuticals). At the latest count, these industries accounted for nearly 78% of all employees in the manufacturing sector.

The pattern of job growth in the individual industries was very mixed. Of the aforementioned industries, mechanical engineering (up by 19.3%), recorded the highest increase in employment in the long-term comparison (first half of 2016 compared with the same period of 2005). This industry benefits from the fact that a relatively high proportion of the value added is created domestically.
Since the end of 2014, however, growth in mechanical engineering employment has stalled, which can partly be explained by the muted international demand for capital goods. In second place in terms of employment growth is the food industry, which was up by 13.1% in the first half of 2016 compared with the same period of 2005. Seasonal fluctuations, for example because of harvests, are particularly noticeable here, but the general upward trend is relatively stable. Even during the recession of 2008/2009 employment levels in the food industry did not fall. Other notable increases in the long-term comparison were recorded in rubber and plastics (up by 12.6%) and metals (up by 9.3%). Both these industries are important domestic suppliers for Germany's successful automotive industry. Within the metals industry, employment levels in resource- and energy-intensive metal production (down by 0.7%) fared much worse than in the manufacturing of metal products (up by 14.8 percent). Overcapacity, for example in steel production, was a factor here.

Strong increases in the automotive industry since the economic crisis

Job growth in the period under review was much lower in the automotive industry (up by 2.1%) and in electrical engineering (up by 0.5%). For the automotive industry, this was partly because the employment rate had already been in decline between 2005 and the beginning of the financial crisis in late 2008, which was not the case in most other industries. This decline accelerated during the recession. Since the low of early 2010, however, the level of employment in the automotive industry has grown above average. During this period, domestic automotive production has expanded at a much faster rate than the average for the manufacturing industries as a whole. In the automotive industry, and in others, the proportion of highly skilled employees in the workforce (e.g. in R&D) has increased. At the same time, the proportion of employees working in production has fallen. Competition from production sites outside Germany is particularly fierce here. This also applies to parts of the electrical engineering industry, which partly explains the low rate of employment growth. The chemicals industry is the only one of the industries under review here that had fewer employees in the first half of 2016 than in the first half of 2005 (down by 0.6%). Weak growth in domestic chemicals production and the comparatively low level of investment in German sites are among the main reasons for this decline. Real net fixed assets in the chemicals industry in Germany have fallen continually in recent years.
Looking at the overall picture, employment growth in the German manufacturing sector has been positive in recent years. Despite ongoing measures to increase productivity, muted production and investment activity in German industry and fierce international competition, the number of employees has increased both since the recession and over the longer term. The labour market reforms introduced up to the mid-2000s have played a part in this. For some time now, however, the rate of employment growth in Germany has been slowing. This is probably because of the low level of growth in global GDP and investment activity and the political and economic risks both in and outside Europe. Furthermore, companies in various manufacturing industries are tending to invest abroad rather than in Germany. And decisions made by the current federal government have worsened the regulatory environment, with the labour market and pensions among the areas that have been affected. Increasingly, however, the shrinking supply of workers is also becoming a factor. In conclusion, we expect growth in industrial employment to stagnate up the end of 2017, albeit on a very high level. It is likely that any potential impact resulting from the successful integration of migrants will only become apparent in subsequent years.
Originalfassung in Englisch vom August 22, 2016: ˮDeutsche Industrie: Beschäftigungsaufbau dürfte endenˮ