Eric Heymann
Analyst
+49(69)910-31730
eric.heymann@db.com
www.dbresearch.com
Deutsche Bank Research Management
Stefan Schneider
The traditional German export sectors pay their employees above-average wages and salaries. The top right-hand quadrant of the chart shows those sectors that generated a foreign trade surplus in 2016 and also paid their employees gross wages and salaries above the average for the manufacturing sector as a whole. In the automotive industry alone, the foreign trade surplus in 2016 was EUR 122 billion (39% of the total surplus). Wages and salaries in this sector were 27% higher than the industry mean. Mechanical engineering took second place in terms of foreign trade surplus (2016: EUR 94 billion). 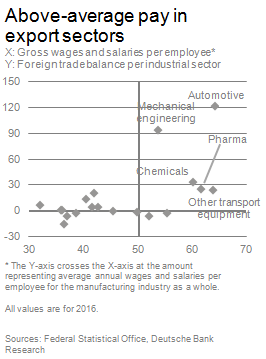 Another important export industry in Germany, electrical engineering, is missing from the top right-hand quadrant of the chart. The electrical engineering sectors (computer, electronic and optical products as well as electronic equipment) collectively exported goods worth EUR 150 billion in 2016, placing electrical engineering third in the export statistics (i.e. before deduction of imports), after the automotive industry and mechanical engineering. However, both sectors are in the bottom right quadrant. This is because they pay their employees above-average wages and salaries in 2016. However, Germany imported more electrical engineering products than it exported so both sectors have (slight) foreign trade deficits. The import side is dominated by consumer goods, while on the export side the focus is on capital goods.
Overall, the data indicates that the often criticised German foreign trade surplus is primarily due to the quality of the exported goods and does not come at the price of low wages and salaries. Germany has specialised in technologically sophisticated industrial products and in fulfilling individual client requirements, while a large proportion of more "basic" products are imported. This economic structure has developed over decades and is also based on the buying decisions of millions of customers abroad. That is why the criticism lodged against the German foreign trade surplus falls short of the mark when it focuses largely on exports. What should politicians do to weaken this export strength – and why?
In the next few years, the German foreign trade surplus is likely to shrink anyway. Indicators of this include the higher investments made by German industrial companies abroad to serve local demand. Demographic developments (ageing population, falling labour force potential) also mean Germany is likely to produce less for foreign countries and consume more itself. However, this will probably be an evolutionary process. If German industrial companies continue to succeed in launching innovative products and increasing the efficiency of production processes (buzzwords: Industry 4.0, digitalisation of the value-added chain, Internet of Things), Germany's industrial export basis is likely to remain strong in years to come. And the companies concerned will be in a position to continue paying their employees above-average wages and salaries.