Growth dampened by lack of skilled labour in industry 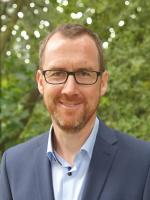 Constantin Pracht
constantin.pracht@db.com
www.dbresearch.com
Deutsche Bank Research Management
Stefan Schneider
At 0.3% qoq, German GDP growth in the first quarter of 2018 slowed markedly compared with 2017, when GDP rose by an average of 0.7% per quarter. Whilst this was partially attributable to temporary factors, the large number of vacancies is gradually becoming a stumbling block for the German economy. Manufacturing, in particular, has been hard hit of late, with the number of job openings in the first quarter of 2018 up by 38% on the same period a year earlier.
In the first quarter of 2018, the number of vacancies in Germany was up by a total of 12% on the same period a year earlier. According to the IAB, job openings in Germany came to around 1.2 million, the highest level since the reunification. Demand for new staff rose particularly sharply in manufacturing (roughly 160,000 vacancies, +38% yoy).
Working hours per capita are declining 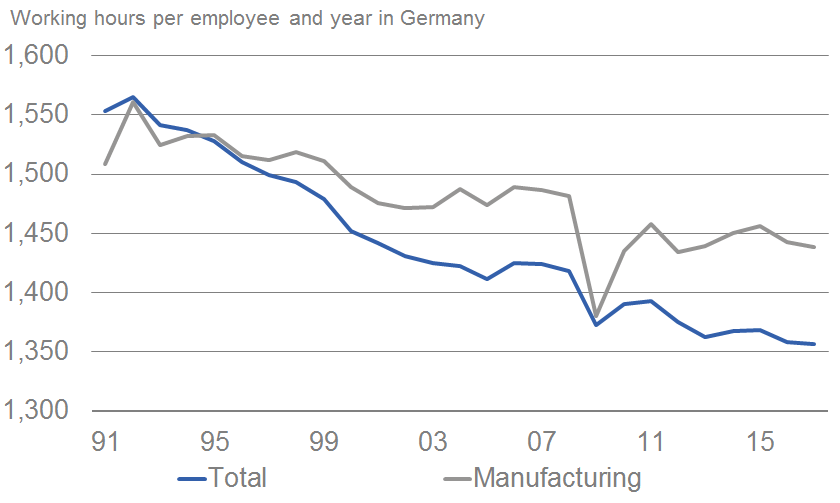 Source: Federal Statistical Office
Signs are increasing that skilled labour shortages in Germany are gradually turning into a bottleneck for growth. This view is, for instance, corroborated by the IAB’s recent job vacancy survey. Accordingly, around 43% of the companies polled were struggling to fill positions in 2017 – a new all-time high. The lack of applicants was seen as the key reason for the difficulties encountered when recruiting staff (31%) – compared with only 14% in 2010 – followed by insufficient job qualifications (23%). Wage claims, on the other hand, were of less importance (15%).
Another argument: According to a survey published in early 2018 by the DIHK, the German Chamber of Commerce and Industry, the shortage of skilled workers is seen as the biggest risk for future business activities. 60% of the companies polled said they were affected, up from just 16% at the beginning of 2010. The report of the DIHK clearly points out that “the shortage of skilled labour is turning into a real obstacle for future growth."
In actual fact, skilled labour shortages ought to have already translated into slower growth in Germany. In the first quarter of 2018, seasonally-adjusted GDP in Germany inched up by only 0.3% qoq, compared with average growth of 0.7% per quarter in 2017. At only 0.1% qoq, first-quarter manufacturing output was even more sluggish, after recording average quarterly increases of 1.3% in 2017.
Although slowing activity can be attributed to several reasons (including special effects such as strikes and the flu epidemic), our expectation that growth in the current cycle is past its peak is also the result of the labour bottleneck. With order books well-filled (not only) in industry, a lack of skilled personnel to fill open positions is hardly conducive to growth. Following from the DIHK’s recent labour market report, 39% of industrial enterprises reported that they have to restrict supply or turn down orders as a result of longer-term labour shortages. 53% cannot exploit their growth potential. Eventually, companies should be less willing to invest in new machinery or equipment, if they cannot hire the required personnel.

What can companies do to offset the rising number of vacancies? In the short term, employees could step up their work volumes. But this is already common practice in many companies and cannot be extended at will. Extra hours worked by the present workforce are hence subject to strict restrictions (also in legal terms). It is noteworthy that the average number of hours worked per employee has been pointing to the downside over the past decades, marking an all-time low of 1,356 hours in 2017. This translates into a decline of 11% compared with 1995. It can be plausibly assumed that the trend of decreasing working hours is generally in line with the employees’ preferences. As indicated by the recent wage negotiations in the metal and electrical engineering sector, the workforce definitely prefers lower work volumes.
If child-care hours were extended, parents who are currently working part-time could work longer hours. In addition, the “hidden reserve" of skilled workers could also be reattracted into the labour market. However, these measures would leave a positive mark only with a certain time lag. In the short to medium term, effects thus look set to be limited. This also holds for the generally valid call for more and better education as well as lifelong learning. In recent years, immigration to Germany has helped to alleviate skilled labour shortages. This is above all true for skilled workers from Europe, who were attracted to the booming German labour market. But with economic activity picking up in many EU countries, this impulse ought to subside. Integrating refugees into the labour market generally takes time and money: Their language skills and job qualifications have to be adapted to the needs of local companies.
Apart from the qualification measures for (future) workers, which will only leave their mark in the medium to long term, the government does not address the fundamental issue in an effective manner. Reducing the maximum duration of limited employment contracts and granting employees the right to return to full employment after moving to part-time jobs, its labour market programme introduces further regulations which undermine entrepreneurial flexibility and push up bureaucratic costs at many companies. At the same time, the calls of the business sector for more flexible daily working schedules are ignored.
More job vacancies in manufacturing industry 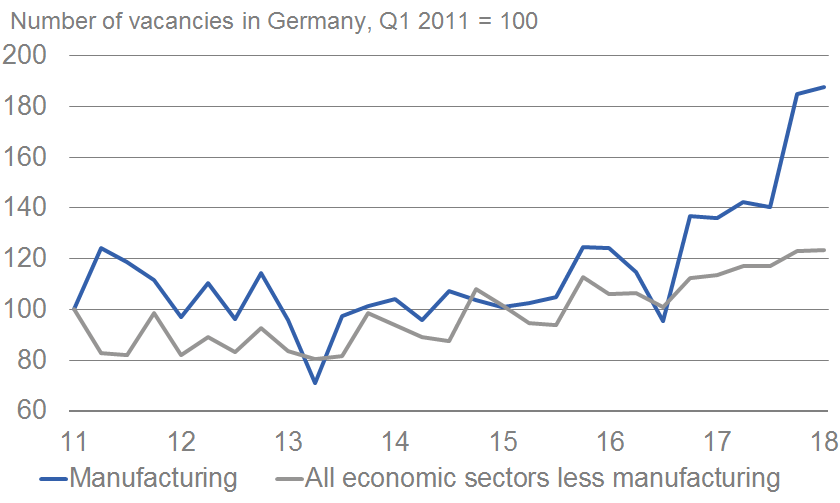