Information
GUEST
You will be logged out of your session in 180seconds due to inactivity.
Continue session
Your session has timed out due to 30 minutes inactivity!
Continue with new session
Advanced Search


The history (and future) of inflation ...
Craig NicolJim ReidNick BurnsSahil Mahtani
It may not feel like it, but we live in inflationary times relative to long-term history.
Region
International
Periodical
Thematic Research
PDF 201K
This is an excerpt of Long-Term Asset Return Study: The History (and Future) of Inflation..., published on September 17, 2018.

The history (and future) of inflation ... 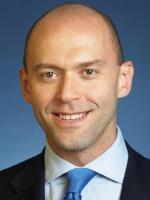 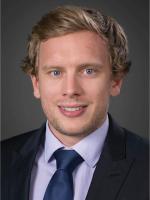 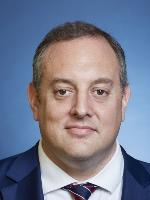 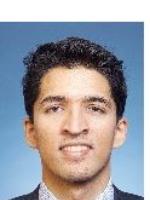 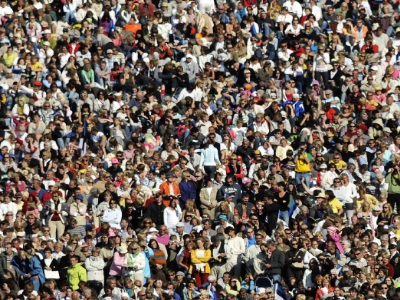 It may not feel like it, but we live in inflationary times relative to long-term history. Before the start of the twentieth century, prices crept higher only very slowly over time and were often flat for long periods. In the UK prices were broadly unchanged between 1800 and 1938. However, inflation moved higher everywhere across the globe at numerous points in the twentieth century. UK prices since 1938 are up by a multiple of 50 (+4885%).

So what changed? We suggest that it was a confluence of forces, ultimately underpinned by a unique explosion in the global population. Before this explosion, precious metal currency systems had survived for centuries with only occasional breaks. However, we speculate that in an MV=PQ world, it is impossible to have population growth (that should increase real output (Q)) without falling prices if MV is fixed. Under precious metal systems, M (money supply) is essentially fixed, and let's assume V (velocity) is steady over the medium term. Rapidly falling prices do not work in a democracy as this would necessitate falling nominal wages and profits, which wouldn't be politically tolerable.
Price series for all countries with continuous data back to 1900 on a log scale. Ordered highest (Brazil) to lowest (Switzerland) over the period 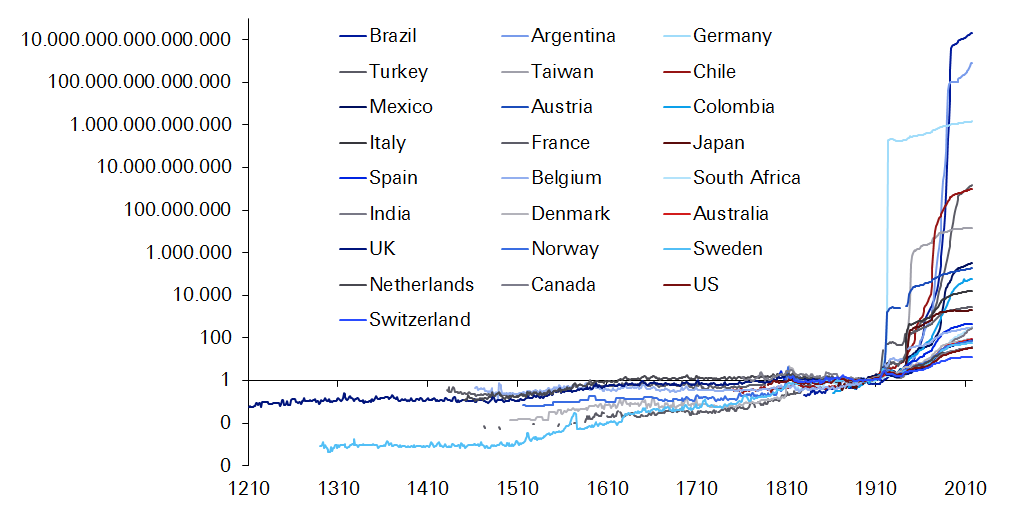 Source: Deutsche Bank, GFD, Note: Data is rebased at 1900 for all countries.
As the twentieth century progressed, pressure against precious metal currency systems rose, and many countries periodically suspended their memberships and loosened policy. Inflation ensued. Two world wars and the response to the depression magnified this theme. 1968 was the peak year in history for global population growth, and we believe that the post-WWII Bretton Woods monetary system was overwhelmed by the population spike and the associated increases in aggregate demand (super-sized by rapid productivity improvements). There was simply too much pressure for a system that relied on money backed by a limited supply of commodities.
Ultimately, the Bretton Woods system collapsed in 1971, heralding a new era of fiat money and credit creation. The response over the next few decades was a fairly widespread build-up of credit and the financialisation of the global economy. Inflation was initially the inevitable consequence. Then why did inflation start declining again from the 1980s? Well, global population growth progressively slowed from its 1968 peak – and we saw a unique surge in the working age population as the population spurt from the 1960s reached adulthood at the same time as China integrated itself into the global economy, massively adding to the already rising supply of global workers.
Unparalleled inflation also occurred in asset prices, especially from 1950 to 2000. UK housing is the longest time series we have for any traditional asset in our database. It took 649 years for nominal prices to rise 887%, until 1939 (0.4% annualised). However, in the last 79 years, prices have risen 41,363% (8% annualised). This is not simply an inflation story. Between 1290 and 1939, the real adjusted price of a UK house actually fell 49%. In the last 79 years real prices have climbed 834% (3% annualised). We see a similar picture of extremely strong returns for many risk assets across the globe over 1950-2000 in nominal and real terms.
What is the short- to medium-term inflation outlook? It could be a battle between ever-slower population growth (disinflationary) and working-age populations falling (inflationary). Academic evidence suggests that ageing can be inflationary and that a population with lots of peak-age workers (e.g. 1980-2015) is actually disinflationary.
Future inflation outcomes could also be a battle between the temptation to inflate away the excessive debts we're left with after the 40- to 50-year credit binge and the fact that we currently have independent central banks with low inflation mandates. If we're correct that inflation forces will be higher, central bank independence or current mandates may be tested. While we remain in a fiat currency world, the temptation for a great inflationary reset is ever present. Given historical precedents, our sense is that this will eventually be the route many countries choose to reduce their debt burdens. Governments would continue to run deficits for a long time and ensure that central banks monetise this debt – leading to inflation at a time when wage pressures start to build due to smaller working-age populations.
Higher inflation is our expectation in the short to medium term. Beyond that, such a move may provoke a backlash and prompt a return to a global monetary system based on something tangible. The offspring of crypto currencies may eventually provide the necessary architecture. By then global population growth will likely be at the steady levels it was when precious metal currency systems were stable, relatively successful and the default setting.
So in the very long term (30-100 years), the zero to low inflation seen before the twentieth century may eventually become the norm again – but not in the foreseeable future. And our study suggests that the 1950-2000 period will eventually be seen as a huge outlier in human and financial market history.
For important disclosure information please see: https://research.db.com/Research/Disclosures/Disclaimer